Plant Strong OR Plant Wrong, THAT is the question! 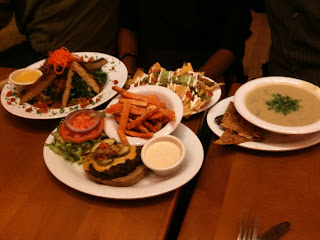 A great meal at Veggie Grill! This is a great example of a perfect way to eat some healthier foods that give that comfort food feel:) All hale kale top left with some mock chicken is the bomb and although mock meats are usually pretty bad stuff i've talked with owner Kevin Boylan and asked him about just this point and he said it's made from lots of veggies mixed with some soy protein...pretty simple:) Not bad! Plus what i really love about it is a meat eater would not know the difference and so for getting folks to transition this is a perfectly healthy meal! Other parts to this meal were a veggie burger (healthy? i'd say not too much but again for a transition meal...it's great! For a Plant Strong person it's a fun meal!:) and a lentil soup that's the bomb anytime, that is just pure tasty and healthy stuff!! Other restaurants that serve up similar plant based meals are native foods and they too offer healthy and not so healthy choices. Now why is this important? Because it's a start for some to taste veggie versions of comfort foods and that is a first step into taking more steps into the plant based world. For vegans, vegetarians or plant based folks you can choose from tons of really awesome / healthy choices and you're great to go!!
BUT THE BIG QUESTION IS STILL PLANT STRONG OR PLANT WRONG?:
I feel one of the biggest reasons why more people do not eat plant based is simple....most (not all!) of the people from the 60's up to today who were vegetarians, vegans looked like crap!
LACK OF GREAT ROLE MODELS!! The people who said 'i'm eat plants only" generally ate all processed, high sugar, high fat, high oil, high salt foods....which if plant based or meat based are not good for you. The result is the same as anyone from today who eats any diet poorly >>> un-healthy & sick, overweight, poor looking skin and eyes appearance.
WHAT ARE 8 THINGS WE CAN DO DIFFERENT TODAY TO CHANGE THAT VIEW AND SHOW A GREAT ROLE MODEL THAT INSPIRES FOLKS?
HERES SOME NEW ROLES MODELS FOR YOU THAT ARE ALL PLANT BASED SUPERSTARS!
Jessica Rucker (my wife:) - Jessie is amazing, super strong in bodyweight, kettlebells, you name it and she walks the walk and can show you how too! Now doing online training!!:)
Mike Mahler (my good friend) - Mike's crazy strong, been a vegan alot longer than i have, crushes the kettlebells, knows more than most doctors about hormone optimization and is just a very cool conscious being!!:)
Brendan Brazier - world class athlete, author of THRIVE diet and developer of Vega supplements (probably the best plant based protein/supplements on the market)
Robert Cheeke - probably the most recognized vegan bodybuilder in the world and author of vegan bodybuilding and fitness.
John Joseph - lead singer for Cro-mags, long time vegan, amazing energy and shape...badass!!!!
Myself:) - turning 49 in june and can beat every physical feat i could ever do at my best in my life except hitting head on bball rim! Plant Strong is no doubt the path! Helping people and planet is no doubt where it's at! So i say to you all if hedging...you can do it, you can eat plant based and become strong or stronger and better than ever, we're all here to help you change YOU for the better AND in doing so we change the PEOPLE and PLANET for the better as well and that is all of our goals!!
80% of MBG'ers - YES most Monkey Bar Gym members eat plant based, maybe not at first and that's okay, but they learn to transition, maintain and then gain athletically from the transition:) THEY make a difference in their own lives, then in their families, business associates...their circles.
Do you see the affect? THAT is powerful and has been the goal since starting...change the fitness world for the better and this is the MBG way of doing that and it's working! JOIN US!
SO What is Plant Strong? Eating foods from the ground....simple & strong: greens, beans, nuts, seeds, roots, grains, fruits. Eating strong when hungry and only til satisfied!
HOW do i make this change? Transition foods are the easy way:
Rice, Almond milks over cows milk is a good first step
On meats just vary some simple substitutions instead like beans, quinoa, plant protein powders or even mock meats like veggie grill and native foods do so well...Gardein also makes a very tasty one:) Although i dont depend on them, i think they make for a good transition choice.
WHAT ELSE do i need to do? READ AND FOLLOW THOSE THAT HAVE DONE WHAT YOU WANT TO DO!! China Study, THRIVE, Engine 2 Diet, Meat is for pussies! Follow the writings, books, articles, blogs from those listed above.....you can do it!
THEN YOU BECOME THE ONE THAT INSPIRES TO CHANGE PEOPLE & PLANET FOR THE BETTER!! Now that is Powerful!!
Plants, People, Planet! STRONG:)
peace my friends!
Jon

Popular posts from this blog

Last night Jess and i did a Q&A on our regular thursday night (5pm cst) webinar on MBG-TV and WOW did we have alot of great questions!
Questions on how do i start eating plant based? Educate urself with some great books;
the china study for education, for FACTS...this includes ALL the studies and factstrhive diet by brendan brazier - for ATHLETE NUTRITION & STRESS, and how to do it...this includes meals and plansyour healthy journey - by dr. fred bisci: for ALL, its great, it gives plans to start where ur at.....FINDS YOUR PATH FROM WHERE YOU ARE TO WHERE YOU WANT TO GO...excellent, easy read too!!eat for health books 1& 2 - by dr joel furhman; for all, different view on nutrition...not calorie counting but nutrient counting! totally different view.THIS LIST - educates you by giving u the facts, giving you a few plans and simple steps to follow to get in great shape, have better energy, get leaner, stronger and feel....better:) another solid question was from an older man w…
Read more

HEY MY FRIENDS!!:) hope ur all doing great! this last week has been cooool...literally:) the water is getting colder everyday now and right now it's down to about 36 - 37 degrees. Our training is coming along great....still making solid improvements each week, our plant strong nutrition is on point and the MBG is doing GREAT!!:) SO we're feeling pretty good! In my blog each week i'll do my best to relay anything new, answer questions anyone poses, share some of my training, nutrition, alignment training as well as other stuff i'm working on....which over the last year has included Vim Hoff breathing and cold water training and then the Bates Method for Eyesight training....SO hope u enjoy it, hope u ask any questions and hope this inspires you to reach higher....cause i believe in you my friends:)

NOW lets get to this week:) Two things i have really noticed a difference in are my ability to breath better and see better over the last year....thanks to two old tried …
Read more

Hey my friends, i've had many people ask me to layout a tutorial on various aspects of training
that we teach at our Certified Natural Training (CNT) courses....like how to jump high, run fast, walking on your hands and lots more:
Among my favorite topics to teach and most fun for all in attendance is learning how to walk on your hands.....a "Handstand Walking Tutorial"
Never done them before no worries, practice each step, get ownership of each step and you will get it in no time:
We'll take some time over the next few weeks so you can work on one aspect each week.
At the Monkey Bar Gym we do everything in 3 levels. So for this weeks Handstand Walking Tutorial we'll begin here;
Stability Level - this is for beginners, folks coming off injury, older or overweight.....in any case...for them it's about getting aligned first and then progressing in challenge. In my handstand walking tutorial i like to get beginners use to the transitioning of weight and maintai…
Read more

What i dig:)
MBG 3:) my wife jessie! my cats! being outdoors, love riding my bike, gave my car away 6 years ago, helping global cooling, saving animals, inspiring people to be healthier, to help others and the planet!!:)